Is the flattening yield curve telling us a recession is around the corner?

Suddenly everyone is talking about the yield curve: Barron’s, Bloomberg, CNBC and The Wall Street Journal.

Given all the attention it has gotten in recent months, most everyone seems to know that the bond market’s yield curve is dangerously close to inverting, an event that has reliably predicted U.S. recessions in the past. The recent firming of economic growth, however, is a reminder that the shrinking difference between short- and long-term Treasury yields by itself does not indicate economic weakness ahead.

Some say, “No. This time is different,” and that the flattening yield curve is not a concern. The truth is we don’t know for sure. But we do know the bond market is telling us that inflation expectations appear well-anchored, the economy is not showing signs of overheating and rates are already close to neutral. This suggests that there is little reason to raise rates much further, invert the yield curve, put the brakes on the economy and risk that it does, in fact, trigger a recession.

While we are not currently experiencing an inversion, the yield curve is steadily narrowing, and investors are getting nervous. The flattening of the curve could be a crucial economic warning. If the gap continues to close at its current rate, it could be on pace to invert sometime between the end of this year and early 2019.

Treasury yields operate under the general premise that the longer one keeps a government note or bond, the greater the rate of return. Therefore, a normal yield curve typically charts lower for Treasury bonds with the shortest maturity dates and higher for those with the longest. In other words, holders of the latter are compensated at a higher rate for having their money tied up for a longer period of time.

For the majority of the nearly 80 years since the Great Depression, a normal, upwardly sloping yield curve has been a good indication that the economy is expanding.

Yield curves can fluctuate, however. Short-term Treasury notes track the federal funds rate, and economic angst can send their value tumbling if investors perceive that the economy is slowing and that Fed action is required. This sends investors scrambling to buy long-term bonds, pushing those yields lower simply by virtue of supply and demand.

If the yield on short-term bonds rises higher than the yield on long-term bonds, it results in an “inversion.” A yield curve inversion is an economic watershed that cannot be overlooked.

If inflation expectations or real growth prospects pick up, the Fed can always raise rates then.

A single line chart is keeping an awful lot of investors up at night: the US Treasury yield curve. It’s been flattening steadily since the end of 2016 and is nearly the flattest it’s been since 2007. We all remember what happened after that. 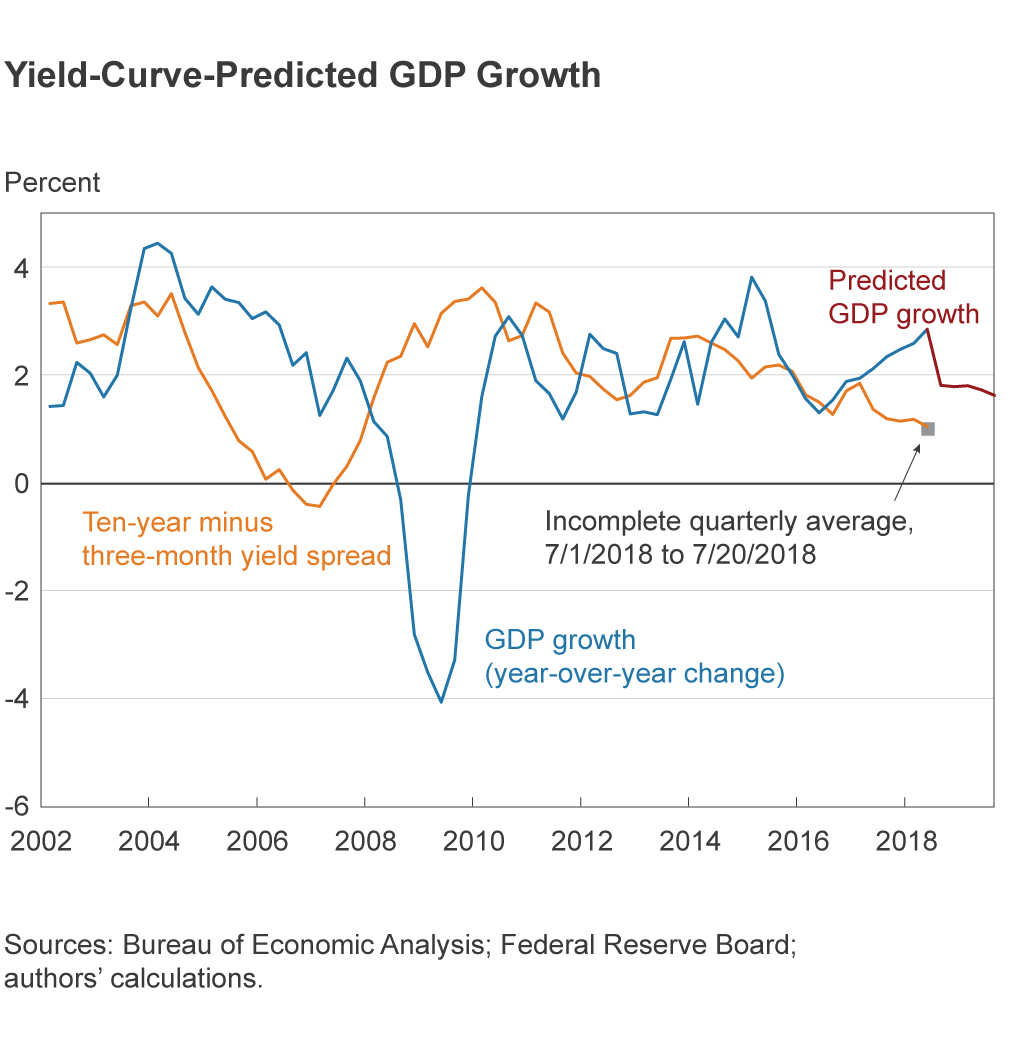 What investors really worry about is the yield curve going beyond flat to inverted, with short-term rates higher than long-term rates. It hasn’t been lost on investors that inverted curves have correctly signaled the past seven US recessions.

We don’t think a flattening curve should trigger insomnia. In fact, it could be a positive sign for stocks.

Could a Flat Curve Be Good?

Whether long-term rates are stuck or not, we’re not convinced that the curve spells trouble for stocks. 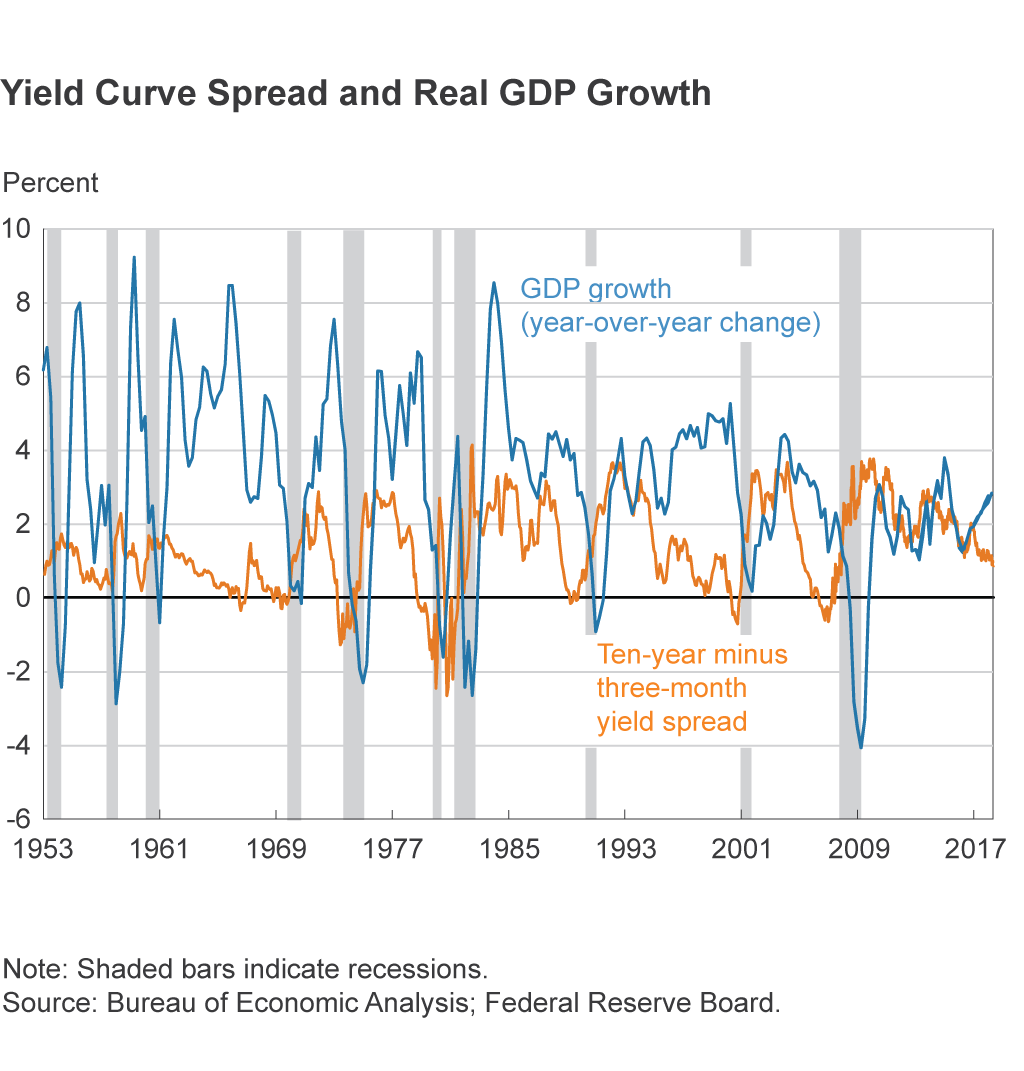 Second, the Fed has no interest in risking a recession by turning the yield curve upside down, so we think policymakers will be watching the 10-year yield closely. Some believe the Federal Reserve will hike six more times between now and the end of 2019. We believe that’s certainly possible, but only if growth stays strong and the 10-year yield rises appreciably as well.

We believe the stock market can perform just fine with rates that high as long as growth stays steady. But all things equal, as equity investors, we’d rather see lower long-term rates. For us, the current aggressive flattening is a positive development for stock markets—not something to fear.

Finally, even if the worst comes to pass and the curve rolls over, history shows that stocks can perform quite well for quite some time after this flip happens. During five mild inversions between 1986 and 2001, the stock market returned an average of 15% in the three years following the flip, starting the month the inversion occurred

The story could be different if a more dramatic inversion happens—think dot-com crisis and global financial crisis. In these cases, stocks lost ground. But unless a 2008-style catastrophe is in the offing, a mild inversion isn’t likely to put a dent in equity portfolios for several years to come—if an inversion happens at all.

Deciphering the many signals from financial markets is not an exact science. But declarations that “this time is different” should be a warning that history might be about to repeat itself.

Please remember that past performance may not be indicative of future results.  Different types of investments involve varying degrees of risk, and there can be no assurance that the future performance of any specific investment, investment strategy, or product (including the investments and/or investment strategies recommended or undertaken by MCF), or any non-investment related content, made reference to directly or indirectly in this newsletter will be profitable, equal any corresponding indicated historical performance level(s), be suitable for your portfolio or individual situation, or prove successful.  Due to various factors, including changing market conditions and/or applicable laws, the content may no longer be reflective of current opinions or positions. Moreover, you should not assume that any discussion or information contained in this newsletter serves as the receipt of, or as a substitute for, personalized investment advice from MCF.  To the extent that a reader has any questions regarding the applicability of any specific issue discussed above to his/her individual situation, he/she is encouraged to consult with the professional advisor of his/her choosing.  MCF is neither a law firm nor a certified public accounting firm and no portion of the newsletter content should be construed as legal or accounting advice.  A copy of the MCF’s current written disclosure statement discussing our advisory services and fees is available upon request. If you are a MCF client, please remember to contact MCF, in writing, if there are any changes in your personal/financial situation or investment objectives for the purpose of reviewing/evaluating/revising our previous recommendations and/or services.Please click here to review our full disclosure.